Deciding bodies and decisions
Court of Appeal of Bucharest, judgment 4180 of 23 December 2013 - Court of Justice of European Union, Case C- 81/12, Judgment of 25 April 2013
Subject matter
Equal treatment in employment and occupation - Discriminatory statements made by someone else than the employer - allocation of the burden of proof -  Prohibition of discrimination on grounds of sexual orientation - probatio diabolica
Summary Facts Of The Case
The dispute arose from the homophobic public statements issued by A.B., a former shareholder of the Football Club. The statements regarded the sexual orientation of a Bulgarian football player whom the Football Club was considering signing. Mr. A.B. declared that, as there were rumours that the player was homosexual, he would not have the player in his future team, as he would prefer that the team be shut down or made up of junior players rather than including homosexual footballers. The Football Club never distanced itself from A.B.’s statements. On the contrary, the representative lawyer publicly admitted that the Football Club shares A.B.’s view. The Romanian National Council for Combating Discrimination (NCCD) sanctioned the discriminatory statements of A.B. with a warning by Decision no. 276 of 13 October 2010. In December 2010, Asocia?ia ACCEPT, a Romanian NGO defending and promoting the rights of LGBT persons, instituted proceedings in front of the Bucharest Court of Appeal to partly repeal Decision no. 276 of 13 October 2010. A.B., transferred his shares in the Football Club five days prior to the statements, but he still possessed considerable power and influence over the decisions taken in the Club.

NCCD sanctioned A.B. with a warning, and not a fine as requested by NGO ACCEPT, due to the expiry of the 6 months period for liability punishable by fine.

The Court of Appeal, seized of the challenge of this decision, raised a question for a preliminary ruling to the CJEU. The referral court was aware of Firma Feryn precedent, in which CJEU found that a similar discriminatory statement on grounds of race made by an employer constitutes direct discrimination under Art. 2(2) of the Racial Equality Directive (2000/43/EC). However, due to the factual differences of the instant case (A.B. was not formally an employer, and the discriminatory conduct was based on sexual orientation rather than race), the Court of Appeal was not sure whether it would be distinguishable in legal terms from the situation in Firma Feryn. The Court of Appeal therefore asked whether A.B.’s statement could constitute direct discrimination under Art. 2(2) of Equal Employment Directive (2000/78/EC) or, at least, a fact establishing a presumption of discrimination that was for the defendant to rebut. The national court also asked whether shifting the burden of demonstrating the absence of discriminatory policies on the F.C.S. Football Club would yield unfair results, and whether the statutory limitation setting a 6-month period of limitation, after which no fine can be imposed for breach of the national provisions transposing the Directive, frustrates the correct enforcement of the rights protected therein.

The CJEU delivered the preliminary ruling in the ACCEPT case (Case C?81/12) on 25 April 2013. The CJEU confirmed at the outset that it is only for the national court to make the finding on the alleged discrimination, without prejudice to the CJEU’s power to provide national courts with helpful guidelines on how to reach such finding. On the questions raised by the Court of Appeal, CJEU held the following:

CJEU found that Firma Feryn judgment does not establish a rule that discriminatory statements must come from persons who hold the legal power to implement recruitment policies. The Football Club is not spared from the burden of rebutting the presumption of having acted discriminatorily merely because the prima facie evidence (the statement) does not come from someone who can act on the Club’s behalf. The CJEU underlined that the nature of the statement must be assessed bearing in mind its impact on society at large. CJEU noted in this sense that, at the date of the statement, A.B. still appeared as a shareholder since the sale of shares had not been registered. Moreover, B.G. did not change his attitude in his public appearances after the sale and continued to describe himself as the ‘banker’ of the Football Club. In those circumstances, at least in the mind of the public, he maintained the same relationship with Football Club.

Finally, the CJEU recognized the Member States’ autonomy in setting the sanctions connected to discriminatory acts, but pointed out that merely symbolic sanctions cannot be deemed to satisfy the requirement of effectiveness, proportionality and dissuasiveness in the light of the wording and purpose of Equal Employment Directive (2000/78/EC). In addition, the duty of national courts to interpret domestic legislation in conformity with the Directive might lead to the conclusion that the time-limit for the imposition of the fine frustrates the purpose of the Directive and, therefore, must be interpreted out (set aside) in the main proceedings.
Diagram 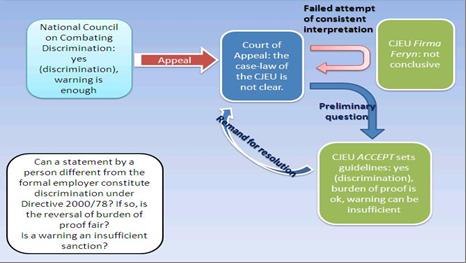 Through the use of preliminary questions the national court wants to understand the exact scope of previous CJEU’s judgments with respect to equivalent, but not identical, facts and EU non-discrimination norms. The national court also questions the allocation of the burden of proof in discriminatory conduct cases, inviting the CJEU to narrow down the scope of application.

First, the Court of Appeal of Bucharest invoked Firma Feryn case, notably paragraph 19 thereof, to clarify the scope of Article 267 TFEU provisions.
Second, Firma Feryn case is used as justification for the necessity of a preliminary reference and in support of the admissibility of referral. The referring court asked the CJEU whether the interpretation CJEU gave to Art. 8(2) of the Racial Equality Directive in Firma Feryn can be applied by analogy to Art. 10 of the Equal Employment Directive. In concreto, the Court of Appeal asks if discriminatory statements could create a presumption of discriminatory employment policy of the Football Club. The Court of Appeal disagreed with the respondent’s claim that the preliminary questions were fact-specific and did not raise a question of interpretation of the EU norm of general interest. After citing the exact content of para. 19 of Firma Feryn, the referring court stated that: “Formulating the preliminary questions in concrete terms does not have the significance of requesting the application of EU norms to a particular case, but is meant to provide necessary information to the European Court so that its interpretation will be useful to the national court. Formulating the preliminary questions in imprecise terms could well lead to provide an answer too general and that cannot be used by the national court for solving the case.”

The referring court cited the two judgments as the most relevant CJEU jurisprudence to indicate on the interpretation of EU norms to the specific circumstances of the case before it. However, the referring court found that the facts of the present case were different from those of the Bosman and Firma Feryn. Namely, the author of the discriminatory statements, A.B., could not be considered an employer under the Equal Employment Directive, as he was no longer a shareholder of the Football Club. Therefore, the referring court appreciated that the existing CJEU jurisprudence did not fully clarify the interpretation of EU norms in regard to the specific circumstances of the case at hand: “[t]he invoked jurisprudence is not enough for the national court to clarify the exact scope of the notion of direct discrimination in labour given that discriminatory statements coming from a person who, by law, cannot bind the company that is recruiting staff but, due to the close relationships it has with the company, could decisively influence its decision or, at least, could be perceived as a person who can decisively influence the decision.” […]