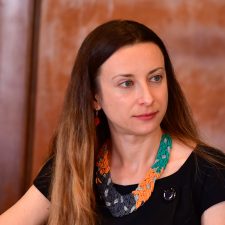 Madalina Moraru (PhD in Law) is currently a Scientific Coordinator and Researcher at the European University Institute (EUI) in Florence, Italy, researching and coordinating various Projects financed by the European Commission on fundamental rights, judicial cooperation, and migration issues. She obtained her PhD from the EUI in 2015 with a thesis entitled Protecting (unrepresented) EU citizens in third countries: the intertwining roles of the EU and its Member States. She has a magna cum laude LLM in European Law from Durham University (2008), as well as from the EUI (2010), and a law degree from the Faculty of Law, Bucharest (2007). Ms Moraru participated as Country Correspondent for Romania, legal expert and project leader in several European Projects financed by the European Commission, European Parliament and the European University Institute on a different range of topics: protection of EU citizens abroad, fundamental rights of EU citizens and third country nationals, and training of national judges from EU Member States on EU law subjects. She has organised several conferences on the law of EU external relations and published articles in Romanian, Italian and European journals on: protection abroad of EU citizens, the EU fundamental right of due process and judicial dialogue between domestic courts and the CJEU.